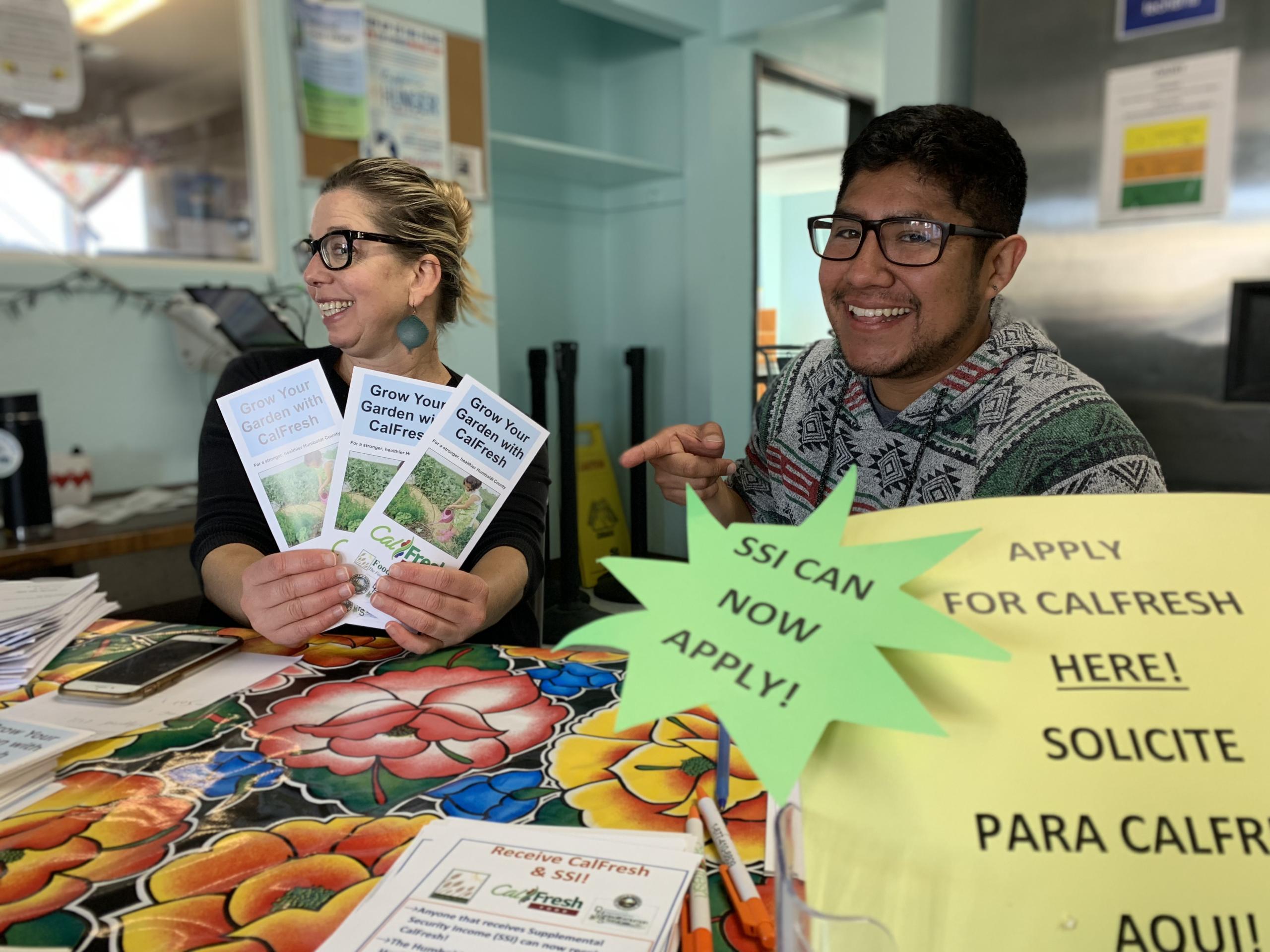 The phone calls to Food for People’s CalFresh Outreach team began last September. At first, it was a few each month, by January it was three or four per day. The callers have questions about the upcoming expansion of CalFresh (formerly Food Stamps) benefits to Californians receiving Supplemental Security Income (SSI).  This change was included in the 2018-2019 state budget and will be implemented on June 1, 2019. The Humboldt County Department of Health & Human Services began accepting applications on May 1, 2019. The callers are all elated, some in slight disbelief that they will finally be eligible for the nutrition benefits of CalFresh. For many of them, this extra money for food will be life-changing.

SSI is a program administered by the Social Security Administration that provides a very basic income to older adults and people with disabilities with no or very limited other income or resources.  Approximately 8.2 million Americans rely on SSI to pay for their basic needs like food, housing, and medicine.  Most SSI recipients either can’t work due to a disability, or are seniors receiving very little or no Social Security income due to limited work history in the traditional labor market. Women who never worked outside the home, farm workers, domestic workers, and others who were paid “off the books” are often SSI recipients. More than two-thirds of elderly adults receiving SSI payments are women.  There are about 6,000 SSI recipients in Humboldt County; the majority receive the benefit because of a disability.

The maximum federal payment for an individual on SSI is $771 a month.  Some states, like California, kick in a small supplement to make up for the higher cost of living. The maximum federal benefit of $771 a month is just 74% of today’s federal poverty line (FPL). The State Supplemental Payment (SSP) is California’s supplemental payment to recipients of SSI. Current levels leave California SSI recipients receiving the maximum combined state and federal benefit living at just 89% of the federal poverty line. A person with earnings at 100% FPL receives $12,060 annually.  According to the California Budget & Policy  Center, a single adult in Humboldt County must earn at least $22,792 annually to meet all basic needs. Those surviving on SSI alone fall far short of meeting their needs. After paying for housing, they often have to choose between medicine, food, and basic hygiene items.  On average, 35% to 45% of the households Food for People serves each month contain an SSI recipient. Many live alone and report charitable feeding operations like ours as their only sources of food.

Why are some of the poorest and most vulnerable Californians not already eligible for CalFresh?  California’s “cash-out” policy started in 1974 when the federal government began the combined federal-state SSI/SSP program. At that time, states were allowed to increase their state supplementary payment instead of administering food stamps to SSI/SSP recipients. California opted for this “cash-out” policy and increased its monthly SSP grant. Over time, the SSI and SSP grants failed to keep up with the rising costs of living, even with annual Cost of Living Adjustment (COLA). From 2009 to 2016 the COLA was suspended for SSP as a means to address the Great Recession. Even today SSI/SSP recipients whose sole source of income is SSI/SSP are living at 90% of the federal poverty line.

The policy began failing to meet the food needs of these Californians in the 1990s when costs of housing and healthcare began to skyrocket. Advocates like Edie Jessup, a  member of Food for People’s Board of Directors, have been working for decades to reverse this policy. “This major change in state law to allow elders and persons with disabilities who rely on SSI to be eligible for SNAP/CalFresh is a great win for food equity and access by some of our most vulnerable neighbors.  I have been working on making this happen in California for over twenty five years.  Every other state has fixed the problem, and now California will allow SSI recipients to get food they are eligible for, improving their health.  Additionally, it will help Food for People, as nearly 45% of our hungry clients are on SSI.  Now these Californians can shop at farmers markets’ and grocery stores.  It is an economic win for our county, as more money will be used to buy food.  Thanks to all the state advocates for finally making this food justice change!” For help applying for CalFresh, contact Heidi at @email or call (707)445-3166 ext. 308.